The biggest milkshake in the software world is Microsoft’s. For 20 years, if you wanted to make money by writing retail software, you did so by targeting Microsoft operating systems: DOS and then Windows and then Vista (just kidding about that last one!).

In 2007, Apple introduced the iPhone. At the time, Steve Jobs said that there was no need for 3rd party developers to directly program the device, that instead they could program awesome iPhone-enabled Websites that would be just swell. No one liked that idea.

In July of 2008, Steve Jobs opened the iPhone SDK to general development and announced the creation of the iTunes App Store. In its first three days of availability, users downloaded more than ten million small programs from Apple’s brand-new “App Store.” 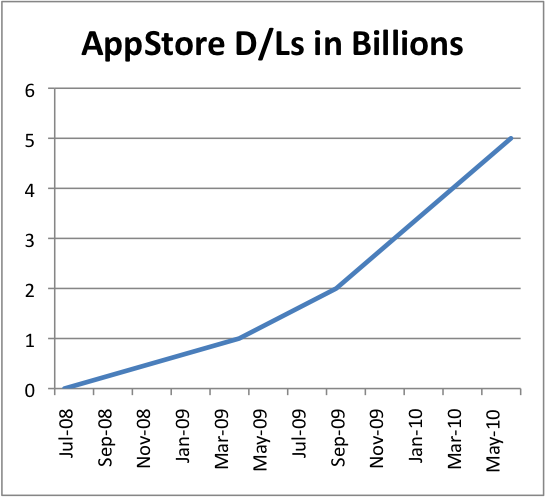 That’s about 10 million app downloads per day. To give you a sense of proportion, there are about 3 billion books sold in the United States every year.^[3]^

Apple has been drinking Microsoft's milkshake.

About 25% of apps are free. Free apps are far more likely to be downloaded than paid apps (no surprise), but at the same iPhone 4 launch, Jobs said that Apple had paid out \$1 billion in royalties to iPhone developers.

Which, not coincidentally, will be the subject of our next spine-tingling update!

[[1]]{#1} This was originally said by Senator Albert Fall in an explanation of the Teapot Dome Scandal, but it’s unlikely he said it with the elan demonstrated by Daniel Day Lewis in “There Will Be Blood.”

[[2]]{#2} Closer to the fifth generation, given the differences between the iPhone 3G and 3GS.