Time to bite the hands that have fed me, but this is important: When a Marketing/PR department has editorial control over a technical article, it's not journalism. It's not even close to journalism. It's, at best, an overview or a tutorial. What it is most emphatically not is journalism.

Journalism is bound by the rules of scientific inquiry -- it's not the reporter who's supposed to be objective, it's the process. Conclusions are supposed to be based on valid arguments.

Valid is different from true.

That Ars article is well worth reading as a whole, but let me quote the relevant line:

A good debate should first establish that all the arguments are valid, and then spend the rest of the time quibbling about the premises.

The same is true of journalism, including "trade journalism," which is the general name for the largely thankless branch of reporting dedicated to serving a specific industry.
Take the lead article at Intel's "Free Press": Why Smart TV is Not PC. It has a simple valid argument:

It ought to be easy to make this argument, as easy as the argument that "Ham is not Beef."

But what the heck is a "Smart TV"? It seems to have something to do with Internet connectivity and computer power. My current TV is entirely driven by either my Tivo or my Xbox, both of which are connected to the Internet; many people watch through cable boxes which can record shows, stream media, etc.. Are they "Smart"?

It's not journalistically egregious that they don't define "PC" because journalism doesn't have to be rigidly formal and we all know what... wait a second... Look at this quote:

"Do you want to live in a world where your Tivo says, 'I'm terribly sorry that before you can see this next show I have to defrag myself?'

What does that relate to? Is waiting for defrag a PC characteristic or a Smart TV characteristic? From the form of the argument, I take it to be a "PC Characteristic," in which case it's valid if and only if a Tivo is a "PC" (uh...)

But even if it's valid it's certainly not true. I've had Tivo for 6 years and have never had to wait for a defrag to watch a show. Heck, I can't remember the last time I was stopped cold by a defrag on any computer.

That particular article was not developed using "the same reporting and writing [and what about editing?...Ed.] techniques as more traditional journalists."

And although it ticks me off that Intel has the nerve to claim the title of journalism, my point isn't that their articles are particularly non-journalistic, it's that when a company sponsors content, they do not expect, want, or tolerate objective journalism.

The Soylent Corporation will not pay for an article on "Soylent Green Is People."

Trade journalism is written in service to the readers. The upshot of that is the potential of pissing off the companies whose advertising supports the trade publication in which it appears.

In the trade press, a pissed-off company is a direct burden to the publisher. Trade publications, whether in print or on the Internet, rely on trade advertisement. If you're in the software development trade press and Microsoft pulls their ads, you're either dead or entirely reliant on support from one of Microsoft's chief rivals. Tick them off and you're dead. That's why there are no journalistically-driven programming magazines left (and, by the way, in my day Microsoft was actually less likely to bully with ads than Sun and Oracle).

The Web has made it much, much easier for pissed-off companies to use their advertising budget in retaliation for journalism that does not suit their agenda. It used to be the case that the ad-folk could say "Our magazine is an important trusted source in the trade. If you pull your ads, it will damage us, but you will lose your visibility with the most engaged segment of the industry."

Now? Google Search is the most important source in every industry. Use your ad budget as a weapon against the trade press, increase your buys on Google -- it may not be as trusted as a trade source, but quantity has a certain quality all its own (and, to be sure, trust in the press, whether mainstream or trade, isn't what it used to be).

I won't say that trade journalism is defeated, because there are still a few companies and many individuals who still have some fight in them. The accepted euphemism in the industry is "on the ropes," which holds out the hope that the journalists, like Ali, have untapped reserves. But we don't live in the boxing world any more, we live in the MMA world, and the best metaphor in that world is that while the trade journalists won't tap, they're being choked out.

I've written sponsored content for Intel, AMD, Microsoft, Sun, Oracle, etc.. I've also written for the trade press. I tell myself that I can keep the jobs separate -- that no one expects a sponsored tutorial to read "On the other hand, our rival's technology doesn't even require this step." But, on the other hand, when I write for the trade press, am I compromised by a tiny voice saying "Don't criticize them or they won't hire you to write their tutorials next time?" I like to think not, since writing is not my major source of income. But, objectively, the argument: 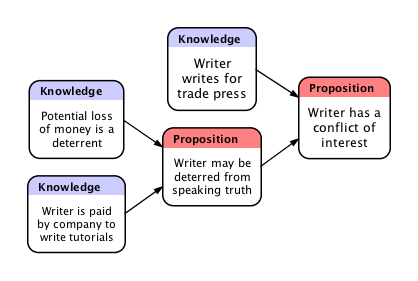 I suppose this is the reason I'm so sensitive to the degrading of the word "journalism." I know what I do when I write sponsored content is not journalism, just as I know that when I write fiction or craft an email I'm doing something different from journalism. But if readers do not know that difference, then how can they be expected to trust anything I say?