Whalesharks are the largest fish in the ocean, but very little is known about their movements (where they breed, for instance, has been a huge mystery, although there's now pretty good evidence that some, at least, breed in the Galapagos).

Whalesharks have a "fingerprint" in the form of distinct spots on their front half. The current state-of-the-art technique for ID'ing whalesharks from photos is a pretty brilliant appropriation of an algorithm for locating astrophotographs in the sky: 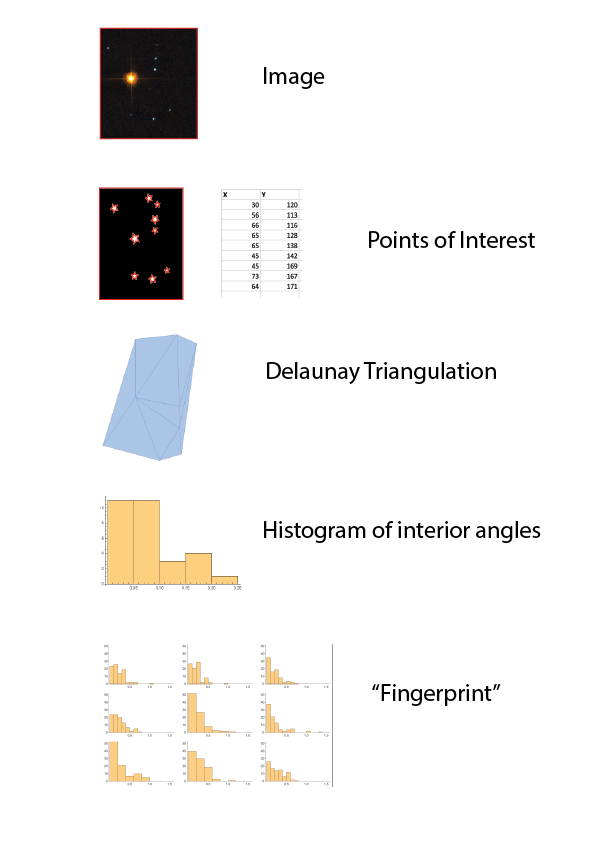 The basic insight is that it's not the absolute location of the points-of-interest but their internal relationships that you can rely on. You can rotate the source image by any amount and the internal angles of the mesh stay constant. And because you're binning, this algorithm is at least somewhat robust against noise (either false POIs or, more likely, missing faint POIs).

This is a great algorithm that is amazingly good with astrophotography. But the geometry of the night sky is constant -- our constellations appear very much as they did to people thousands of years ago. Whether taken last night or last century, a photograph of Orion is going to Betelgeuse in one corner, Rigel in another, and a belt between them.

Two photos of the same whaleshark, though, will almost certainly be from different angles and distances. Another challenge is that the dappling of sunlight and shadowing from surface waves causes a lot of signal noise. So, today, whaleshark researchers have to do a lot of manual processing to identify an animal from a photograph.

My thought is to apply modern data-science and machine-learning approaches to identifying individual whalesharks. The main goal is really to create an efficient pipeline and not, so much, creating a better identification algorithm. (To be honest, I've already tried several "simple things that could possibly work" ML techniques and not gotten any traction, but I'm not giving up.)