I am holding a bar while floating in a murky bay, slowly drifting towards a shipping channel. If I pull on the bar, 6 things can happen, only 1 of which is good. Not to mention the tiger shark. The tiger shark doesn't care whether I pull the bar or not, but still. So 7 things. I pull the bar.

For the past decade, I've had a cocktail-party story about learning to kiteboard -- or rather, not learning to kiteboard -- with an obscenely overpowered two-line kite and a guy behind me on a JetSki shouting encouragement as I get pulled downwind, in 20-yard increments, across a mile of San Francisco Bay. "Kiteboarding -- it's like bull-riding, but with more drowning." Subsequent to that lesson (in which I was literally pulled out of one of my wetsuit booties) I thought "Well, I guess I'm too old for it." Too out-of-shape and too brittle.

But dammit, they make it look so easy.

My friend Florian, who is an expert in getting off his ass, finally convinced me that what we needed to do was take a long weekend, fly to Maui, and take 3 days of lessons. So, here I was, floating like a nerdy dumpling off the beach in Maui, staring up at 86 square feet (8M\^2) of kite bucking in the Force 5 winds, a few degrees from the brilliant tropical sun. At the moment, the kite was flying in its most unpowered state, presenting only its thin, inflated lip to the wind. When I pulled the bar, the kite would turn, catch more wind, and accelerate, exponentially increasing in power, which would be transferred down 20M of finger-slicing line to the harness fastened around my waist. And then:

And then there was the tiger shark. Which isn't a metaphor or one of those "You swim with sharks every time you get in the water" bravados. Florian's rental board was bitten by a tiger shark, at that very beach, earlier in the week. Marine Biologists measured the bite radius and say it was about 12'. ("Measured the bite radius": You know, just like Jaws ). 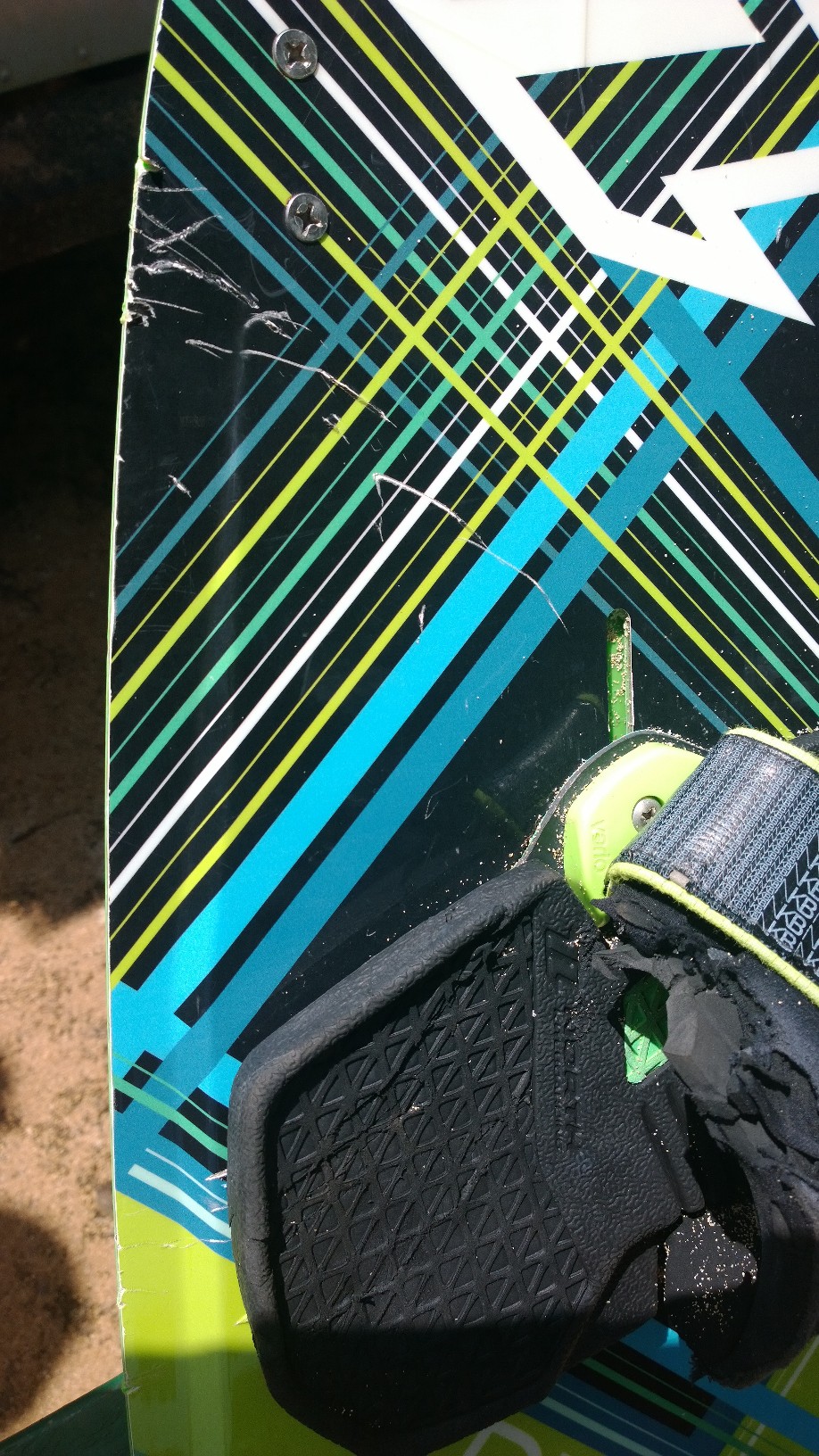 I tried not to think about the shark too much.

So the only bad thing I have to say about the experience is that it's ruined my story. The 4-line kites they have today are literally 180 degrees from what I experienced in San Francisco: my disastrous time in the early 2000s was with kites that, when they crashed, automatically relaunched and tried to fly downwind. So after you crashed you had 5 or 10 seconds to get things under control and if you didn't, the kite would relaunch, jerk you another 20 yards, crash, and give you another window in which to recover. The modern kites I learned on in Maui were the opposite: they are engineered to skid upwind until they stall, still in the water, and give you all the time in the world to get your bearings.

Ultimately, the hardest thing about kiteboarding for me was that I wasn't aggressive enough with the kites! They were easy to fly and forgiving, but I had such bad memories about what could go wrong that I was too tentative with the power. Only once did I fly so aggressively that I fell forward rather than backward.

Another hard thing is that when you're learning, you spend a lot of time using the kite to drag you into position, which involves being pulled through the water by your harness. The force of the water on your chest and all your gear is exhausting and frustrating, because you're thinking "Why am I panting for breath? I haven't done anything!"

By the end of my second day, I was getting up and riding for a few seconds. The third day I took a step back because of equipment trouble, and frankly, I was a little worn down from the weekend's other activities, which included crossing the channel to Molokai to dive with hammerheads (I like sharks just fine when I have a mask on) and shutting down a bar in Ma'alea.

I don't really know what comes next. I think I have 20 more hours of instruction left before it's likely I could start doing it myself: 3 more days just getting up and riding consistently and then some time learning beach launches and landings, which are the most dangerous moments in the sport. The Big Island is a poor place to learn to kiteboard -- there are no instructors and the only reliable place to kiteboard has a beginner-hostile offshore wind. Flying to Maui for another long weekend of instruction is a possible, but expensive option, but probably not for a few more months, at least.

But on my longest ride, which probably lasted about 20 seconds, I felt like I was looking at an open window. With these kites, physically the sport is open to even old brittle guys like me, and it's clearly a sport where, once you know what you're doing you can keep things in balance and not expend a lot of energy. So if I could learn it, I could have a decade or more of a sport that is just perfectly tuned to my sensibilities. So, yeah, I guess I'll try again.